Nanofluids for heat exchange and lubrication

Adding nanoparticles having high thermal conductivity in base fluids could be usefully exploited in devices for heat transport, as long as some important issues are addressed and solved, such as the stability of the dispersions or the proper evaluation of their physical-chemical properties.

In addition to thermal exchange properties, recently it has been observed that the dispersion of nanoparticles of different chemical nature, morphology and size in lubricating oils can confer anti-friction properties considerably higher than that of raw fluids. Most recent studies on multi-generation systems have shown, on a laboratory scale, the effectiveness of anti-wear properties of nano-refrigerants /nano-lubricants, which, keeping constant the power efficiency, would allow to decrease the volumes of fluid employed, and therefore the overall dimensions, and increase the lifetime of the engine, by reducing damage of the mechanical components involved in tribological couplings. Their use in various devices / systems may lead to considerable energy savings due to the reduction of friction / wear phenomena, which involve considerable energy consumption, but still much research must be carried out especially to evaluate the stability with time.
In recent years the group has developed different types of nanofluids, by dispersing various types of nanoparticles (silver, copper, titanium oxide, carbon nanohorns, iron oxide) in different base fluids (water, glycol, lubricating oils). These fluids have been tested tested for thermal exchange properties or lubrication, depending on the application field of the base fluid used for their preparation. 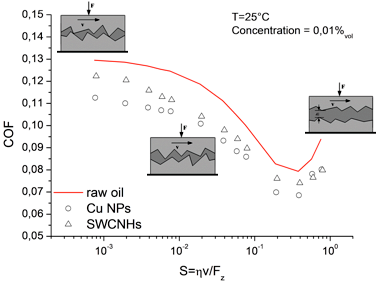 The lubrication conditions range between two extremes, which are strictly connected to the values of the applied load, sliding speed and lubricant viscosity: thick film lubrication (or hydrodynamic) and boundary lubrication. The Stribeck tests, reported above, can display the behaviour of the lubricant in all regimes in which it operates. The curves obtained with the nanolfuids developed at the ICMATE laboratories demonstrated the decrease of the friction coefficients, in various lubrication regimes, thanks to the action of dispersed nanoparticles. This reduction was higher for some types of nanoparticles such as copper and single walled carbon nanohorns. Below some 3D maps are reported for wear tracks measured after tribological tests: they prove the beneficial effect of nanolubricants in reducing wear phenomena. 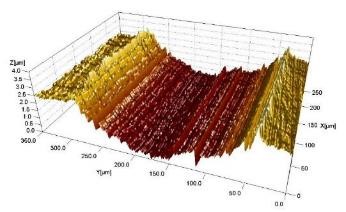 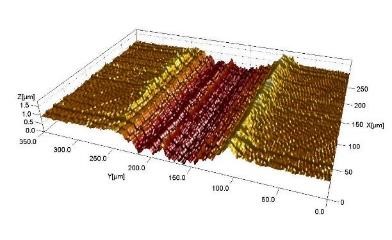